“GOSH!!!” Over the weekend most of Napoleon Dynamite‘s original cast and crew were in Utah for a 15th Anniversary Screening, Meet and Greet, Talk Back, and Fundraiser. The event was hosted by the Utah Film Center, and was held at East High School . . . Yes! The home of the High School Musical movies.

The minute my wife heard about this event, she had the brilliant idea of having me join in on the celebration, selling my original home woven handicrafts out of Deb’s original boondoggle case!

In true Jensen family fashion, I got my wife and kids involved in the building of my epic boondoggle display.

In addition to Deb’s Boondoggle Case, the Utah Film Center had a display of original props and costumes from the film. My girls loved seeing Deb’s dress and Napoleon’s Time Machine.

In the display, they had an autographed film canister that had been signed by the entire cast and crew on the last day of filming. My signature has changed a lot in 15 years, so it was a bit like playing Where’s Waldo to find my name. Can you find it? (Hint, it is on outside ring on the lower left side.)

The highlight of the night was introducing my girls to Jared and Jerusha Hess, and the cast of Napoleon Dynamite!

At first, the girls didn’t recognize everyone! But as soon as they heard them talk, they were instantly star struck!!! Pedro (Efren Ramirez) took animated selfies with the girls, Elizabeth shared her Tater Tot Churros with LaFawnduh (Shondrella Avery), and Napoleon (Jon Heder) reminded me that he helped me out with the boondoggle tying back in the day! My girls also told Jared Hess that their favorite episode of Yo Gabba Gabba is the one he directed with Jack Black. It was just like we were back at Preston High School, hanging out in a classroom in between takes.

The screening ended with the cast and crew sitting center stage to answer fans’ questions:

The entire event was a night we will never forget! My girls were so excited to go to school this morning so they could tell their friends all about hanging out with Napoleon, Pedro, Kip, and LaFawnduh.

As for me, I personally enjoyed reconnecting with the cast and crew! Plus, hand tying all of the boondoggle for my display made me feel like I was back on set again! And as if that wasn’t enough, we sold every single boondoggle keychain that I tyed for this event! In the words of Napoleon, I’d say that is “Flippin’ Sweet!!!”

I will hand tie a custom souvenir boondoggle keychain for you! Jump over to my Etsy store to select your colors. Your Napoleon Dynamite keepsake will come with my exclusive Vote for Pedro enamel charm, and be packaged inside an acetate locker box. I will also gift wrap it in a “Reach for the Stars with Pedro” campaign poster . . . just like I did for the cast and crew at this weekend’s event!

Hey there! I’m Curt R. Jensen and I am an illustrator, paper crafter and consider myself to be a “fun dad!” More about me…

My Daughter Wrote a Book!

Would You Rather? is now available! Visit Mary Ann’s Etsy store @BooksByMaryAnn to pick up an autographed copy for you and your kids.

My website uses affiliate links. If you purchase something from one of my links, I will be awarded a small commission (at no extra cost to you). Thank you for your support! My affiliate and product disclosure can be found here. 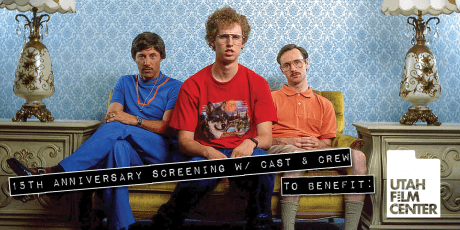 Utah Film Center recently hosted a 15th Anniversary Screening of Napoleon Dynamite with members of the cast and crew . . . including yours truly! I sold my homewoven handicrafts alongside Deb’s famous Caboodles case!

Want a souvenir boondoggle keychain for yourself or a friend? Visit my Etsy store to select the colors for you custom made Napoleon Dynamite keepsake. Every keychain comes with my exclusive Vote for Pedro enamel charm and is packaged inside an acetate locker box.

Use promo code LAFAWNDUH at check out to save 15% off your custom boondoggle purchase.